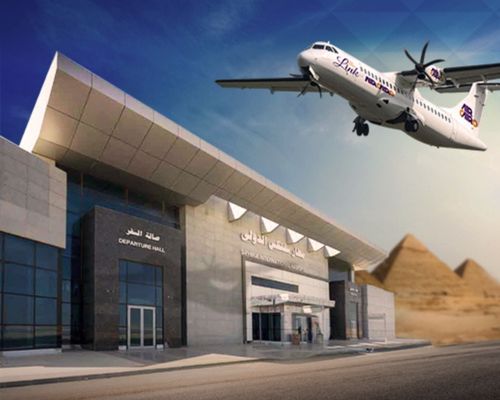 Its two terminals will be able to handle up to 900 passengers per hour (compared to 300 initially announced before an extension of the project) for an annual capacity of the airport of 1.2 million passengers per year. The platform will have a 3,650-meter-long, sixty-meter-wide runway with a tarmac accommodating eight aircraft.

Sphinx International aims to relieve the congestion at Cairo International Airport (13 million passengers before the Covid-19 crisis), based on the other side of the city, and the traffic in the capital. But also, to improve the accessibility of several nearby historical sites for tourists, including the new Great Egyptian Museum of Giza soon to be inaugurated, on the outskirts of Greater Cairo. In addition, its arrival will facilitate connections with the Red Sea resorts (Sharm el-Sheikh and Hurghada in particular).
The airport, which will allow the operation of domestic and international flights, is expected to alleviate pressure from Cairo International Airport, stimulate one-day tourist programs, and facilitate the movement of exports.
The new airport is about an hour's drive from downtown and around two hours drive to Cairo International Airport, primarily serving residents of the Greater Cairo districts of 6 October and Sheikh Zayed, as well as the governorates of Fayoum and Beni Surf.
The Sphinx International Airport will serve tourists visiting Egyptian archaeological sites, mainly the Grand Egyptian Museum and the Giza Pyramids area. It will help to revitalize one-day tourism and ease overcrowding at Cairo Airport and Great Egyptian Museum.
Transportation:
If you are flying to Sphinx International Airport (SPX) and would like to rent a car, you can do that in advance online or at the airport upon arrival.
We recommend you book your transportation method before you start your trip. On the one hand, you often get better conditions than on the spot and on the other hand, you can receive your car relaxed after arrival without having to worry about this.
Some of the apps you can check and available to download in Egypt: are Uber, London Cab Egypt, Careem, SWVL, Didi, Indrive, and more…
Sphinx International Airport becomes the thirty-third Egyptian airport. Egypt currently has four international airports: Cairo, Hurghada, Sharm el-Sheikh, and Alexandria (Borg El Arab).